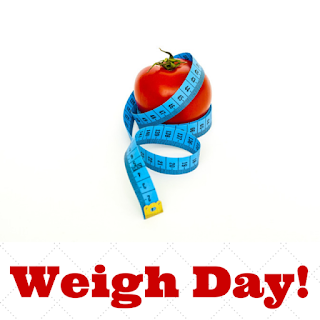 Welcome back for another weigh day recap. Let's start off with the good news. After my gain last time, and probably due to all of your kind encouragement, I was really motivated and had a really good week.  I tripped up one day, the day we went to see avengers, and had a meal that used up all of my extra points in one fell swoop.  One of these days I'll learn to check nutrition facts ahead of time (it was a really good meal though).  I bounced back from that meal and stuck to my guns the next few days, and was down a whopping 4 pounds at my weigh in!  That's the most I've lost in one week since I started (this time).  It felt great to be back on track!

This last week, well, was okay.  I was eating alright, until the weekend hit that is.  We had a baptism to attend on Saturday, that was nice, but the reception held after had way too much good food.  It was a problem.  Halfway into my first plate I realized I had no idea how I would track the food, gave up, and had two plates of dessert thereafter. There may have been some comforting eating involved considering the being around babies and baby talk.  I really have to find ways to cope with emotion outside of food, but that didn't happen the next day.  Sunday, as you're most likely aware, was mother's day.  We spent most of the day hanging out with my mom, we went to mass as a family then out to brunch.  Again, a little bit of a tough day meant a lot of comfort eating on my part.  I was supposed to split a dessert with my sister, I think I ended up eating most of both of ours :/.  Oh, and I started a new cycle the same week, so carb cravings and bloating were in full force.  So, all that considered, I wasn't really expecting much from the weigh in, though I was really hoping I wasn't up again.  Luckily, I was down, though not by much, a very small .2 pounds. But hey, it's better than being up again.

Like I mentioned a couple times, I really need to learn how to deal with emotions without resorting to food.  Every time I'm upset I feel like I "deserve" to eat what I want, and g out and eat something not great for the whole trying to lose weight thing.  I don't know how to knock that idea out of my head and come up with a better coping mechanism.  Any ideas?