Life as an Infertility Representative 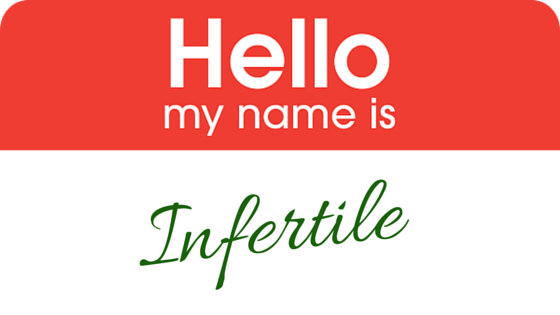 The infertility ministry that the Hubs and I are starting hasn't even met yet, but, as I mentioned before, for the week leading up to the first meeting I'm scheduled for all sorts of events to try to spread the word. Today was day three of four in a row.  Thursday I attended our parish's newcomer dinner, Friday I went to a girls' wine & cheese night (so tough, I know), today we manned a table outside of the Saturday Vigil Mass, and tomorrow we're manning the table all day, after all five masses offered on Sunday. The next two days we'll be working on preparing for the meeting, then the meeting is Wednesday!  It's coming up so fast.

With all of these events, I feel like I'm becoming a bit of an infertility representative...and it's a weird feeling.  While I've been pretty open about our infertility struggles to close family and friends (and you here, of course), I'd never announced to the world or literally worn a label that I'm infertile before.  To be honest with you, it has been uncomfortable, but an eye opening experience as well.

At the parish's newcomer dinner people who have joined the parish in the last year are welcomed to a dinner, and heads of ministries are asked to attend to let the newcomer's know what the parish offers.  I went as a new ministry leader, though I attended the last newcomer dinner they had as a new member of the parish. Anyways, all attendees got name tags, which had just your name if you were a newcomer, or your name and the name of your ministry if you were a ministry leader.  I had a name tag that said "Infertility Ministry" on it, so yep, I've been officially labeled as infertile now.  It was so weird for me to have my identity be tied with infertility for that whole event, that everyone who approached me knew I was infertile, considering it is usually not something visible to other people.  I was so nervous, and didn't know how to approach other people, luckily some people saw that and approached me.  The response I got most was from the older crowd making a joke like "oh, I don't need to worry about that now", but some women approached me and poured out their hearts about their own struggles.  Others affirmed that it was a needed ministry, which I agreed with, though I wasn't great at eloquently stating why I thought so, oh well.  It was really amazing to be met by so much kindness and openness, in the face of something so awkward and raw.

The girls' wine and cheese night was a great experience too.  I'm such an introvert, I really don't get outside my small group of friends very often, so this was definitely outside my comfort zone. But it was great to be with a group of women really trying to live out their faith, so many of them were involved in some kind of ministry, I feel pretty lame with how little I've done in the past up until trying to start the infertility ministry.  Most of them were single, only a couple others were married, but I was impressed that the other married women openly talked about NFP, and the single women were aware of it too.  I on the other hand was not very articulate when I was trying to explain why I think NFP is so important for women regardless, or trying to talk about infertility and explain what we're trying to do with the ministry. But even with my awkwardness, I was impressed by how much the women there were understanding.  I didn't get one insensitive comment, but rather just a lot of support, ideas, and solidarity regarding insensitivity aimed at their stations in life too. It was really an affirming experience, I'm so glad I went.

Saturday mass and manning the table was pretty uneventful.  Most people walked by without noticing (I can't blame them, that's what I usually do too).  Some made the same joke about being too old to need to worry about infertility.  One woman approached us for information for friends, she was very quick to note she wasn't infertile herself.  And then one of the people I had met at the newcomer's dinner, another ministry leader, mentioned how he and his wife never got infertility sorted out, it was just the two of them.  All I could think of to say was that it was only the two of us too.  I wish I could've thought of something better to say, though I don't know what.

After manning the table, we (ironically?) went to a baby shower.  Luckily, it was more of just a party where baby gifts were accepted, no real baby shower events happened, and it was coed, so it was nice to have the Hubs as back up there.  A sibling of a friend who I've met a few times over the years said hi and mentioned that he and his wife were struggling with trying to have a second child.  The best thing I could come up with saying was "oh"and then pretty much just walked away.

I don't know what's wrong with me.  Here I'm trying to minister to people dealing with infertility, have gathered all this information on it, but when I'm given an opportunity to discuss it or do some good in the real world all I can come up with is "oh".  Yes, I've been kicking myself about that failed conversation since then.  Obviously I have no idea what I'm doing and need all the help I can get, ugh.

So, it's been a bit of a hit and miss process.  I'm really amazed at how much positive feedback we're getting, and how much openness and thoughtfulness we're finding. It has been so encouraging.  At the same time, I'm realizing more and more that I have no idea what I'm doing, and am so very far out of my own comfort zone.  Every time I try to talk about the subject, I feel like I sound like an idiot.  Maybe it's just that there is so much going on in my brain about the topic, it's like a traffic jam, none of it actually gets out when I need it too, or maybe I'm just really bad at speaking in general.  Here's hoping (and praying) that going forward God can give me the right words when they need to be said, and help me actually help the people I am hoping to reach. I know I'm useless all on my own.