Preparing the nursery for our little baby M was such a surreal, beautiful, and healing part of the whole adoption process. Back when we bought out condo, almost 4 years ago now, we had always hoped that room would become a nursery. At that point we had already been married 2 years, and so knew we were experiencing infertility, but had hope that it would be easily overcome. After moving in, the room had several iterations. A couple rounds as just a storage room, a guest room, and we tried to turn it into a home office too.

I never really wanted to go in the room, work on it much, or take pictures of it, it was too hard knowing what it should be and wasn't. Several of the times we were in there, trying to clean things up or cut down the clutter I would end up crying, wondering if the room would ever end up being used for what we had always hoped it would be.

And then we got the call that we were matched! Our facilitator asked if we had anything ready and I said no, just a spare room! It had again turned into a storage room, with lots of odds and ends, so the weekend after the call we got to decluttering and clearing out. And this time it was a happy process! Every day after the match I would find myself wandering into the room, thinking about how to decorate, but also wondering and dreaming about the little girl that could be our daughter. It was so surreal that so much hope had now flooded our lives!

My Mom and I were supposed to go shopping for bedroom furniture, but I couldn't get away from work when she wanted to go, so she sent me pictures and we picked it out via text! It was like a pretty luxurious personal shopping experience, haha. One downside though was we forgot to measure in advance, and the furniture was a little bit for our space, but we made it work! We left our guest twin bed in too, just in case we or she would need it in the future. 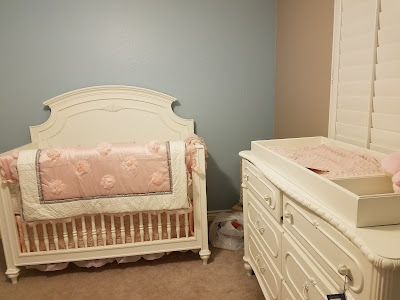 The next problem was the colors. You might notice that the room was brown and blue. And well, those just aren't very girly! I was scared to pain the room pink, in case things changed or fell through, so I decided on some temporary wall paper. I spent days finding the right one, and hours putting it up on one wall. 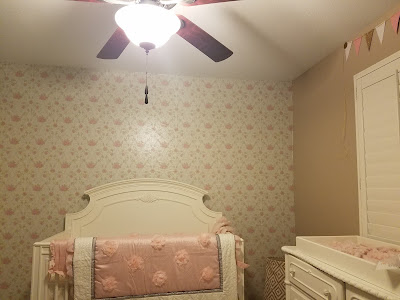 But the next morning it had all fallen down! I guess it was a little too temporary! So on to plan b. I decided I'd just go with lots of pink accents instead. 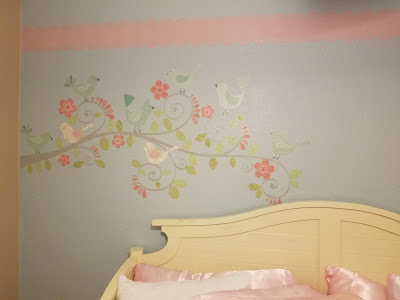 Then I got big flowers, and her initial! 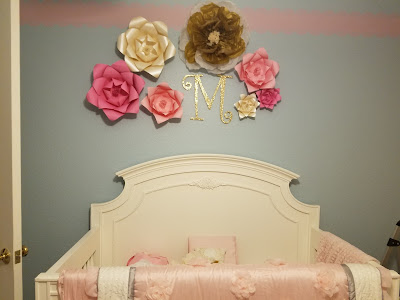 After the baby showers, the room started to fill up with more baby stuff, and before we left there was quite a bit, although the room still wasn't quite complete.

We actually didn't finish the room until after we came back from Wisconsin with her. 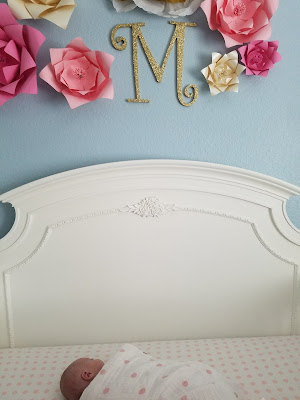 We put the finishing touches on when she was around a month old, oops! But here it is, all finally done! 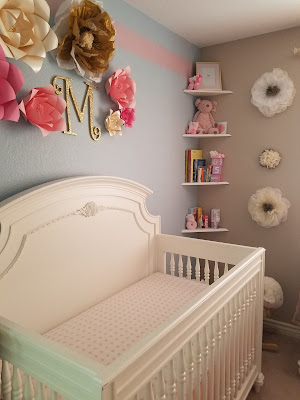 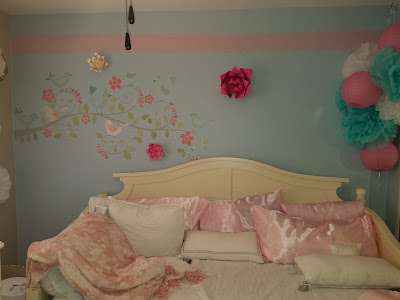 It isn't what I originally planned, and took longer than I had thought, but it ended up more beautiful than I had imagined!