7 QT: A Little Recap of the Last Couple Weeks 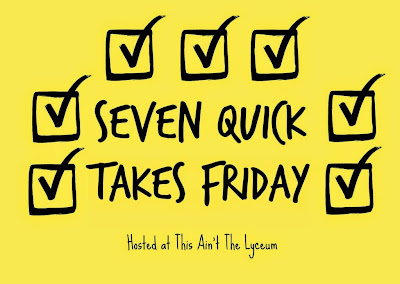 A couple weeks ago, after over five months on the job hunt, I got two offers of employment! That felt awesome! They were both great companies, and it was a tough call.  I ended up going with the firm that's closer to the field I want to be in.  I'm so excited to start next Monday! Thank you for listening to me whine along the way, and for any prayers you sent up for me.  I am not patient, so that was a tough wait.

Of course, getting a new job means giving my notice at my current job. I did that on last week, and I thought it went decently well.  I was trying to keep things amicable, as much as I just wanted to do this: 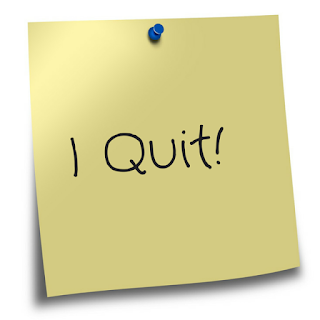 Things were awkward since I gave my notice though.  I guess that's to be expected, but I really hate awkward situations, so two weeks of it was not particularly fun.  I'm glad it's all over now though! My last day on the job was yesterday! So I get a nice three day weekend to rest up before the new one starts!

On a different note, we had our first meeting for our Catholic Infertility Ministry on last week!  It's off to a small start, we only had five people, but they are really great people!  I learned so much from them in just one night!  I'm so excited that people actually showed up and we actually got started!   This next month I'll be kicking up the spreading the word effort (even more), which is a little daunting, but I guess I just have to do it! On that note, I've created a blog button for the ministry's website: 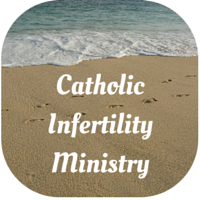 Clicking it will take you to the Catholic Infertility Ministry website, where we've got some resources, and are always working on making it better and adding more (and are always willing to take suggestions). I am not super tech savvy and haven't figured out how to share the html code for the button yet, but feel free to take it and make it link back to www.catholicinfertilityministry.com If you'd like!

On a random note, its actually been raining in my drought ridden state a little bit over the last few weeks.  Probably not even close to as much as we need, but it helps.  My garden is loving it too!  I have some lilac bushes that just refuse to be happy, and I can't figure out if it's from over or under watering.  But when it rains, whether its because they're getting more water or because I don't water when it rains, they perk right up.  Maybe they just prefer their water from the sky, but whatever it is, I'll take it over them dying.  My peaches are coming in nicely too.  I just hope this year I can beat the rats to them. Last year I think I only got a few, the rest were gnawed on right before it was time to pick them :(.

Ooh, there's something else going on in my garden right now too. I can't believe I haven't mentioned here what I'm growing yet.  I made a (tiny) vegetable patch out of a planter area that was looking messy, and I'm growing... TOMATOES (and a little bit of basil)! That's right, little mascots for this blog.  No, I couldn't help myself, I had to do it.  So far, they're pretty happy and growing fast! I even see our first few tomatoes coming in! I love it!  Here's the latest picture I have of them: 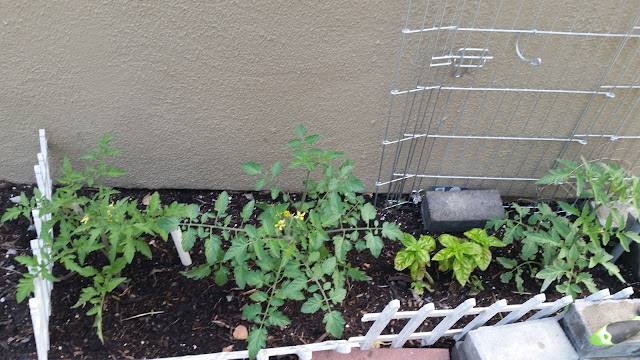 This was a week or two ago, they've gotten bigger since then! I really need to get them some cages but keep forgetting.  Hopefully soon I make my way to home depot.

Last weekend we went to nearby city to see the Hubs's favorite band in concert!  It was a last second idea and kind of ended up being an early birthday present to the Hubs after we realized how much it would cost to go out of town on a holiday weekend.  It took about three hours for us to make the usually one hour trip, but we expected it and were prepared.  The concert was awesome and totally worth it!  We got to see Matt Nathanson, who was very talented, and hilarious, though his squirmy dance moves bothered the Hubs a little, lol

Then we saw the Fray! 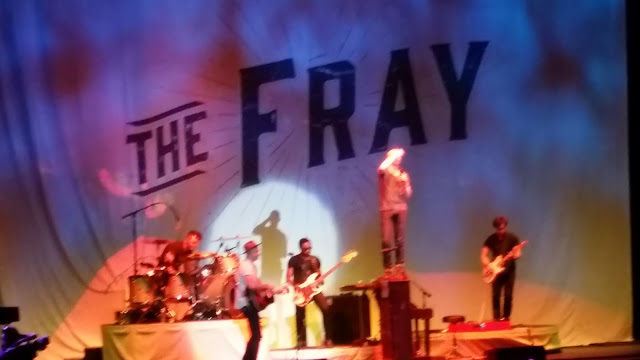 Ah, I love them so much.  Really, I think they were better live than recorded, I love when that happens.  Oh, and I managed to get, oh, this close to the lead singer.


Yea, that was awesome.

Last was Train.  Always so good, an they put on a great show. 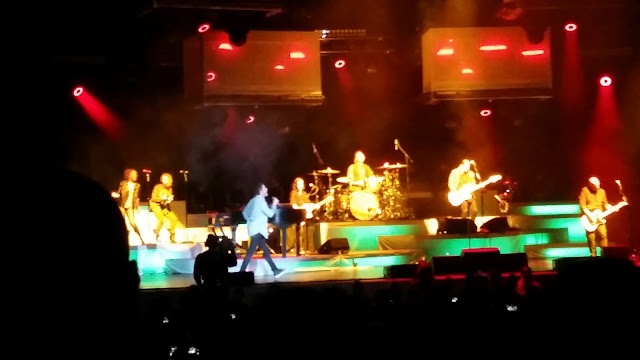 The only negative is that they saved the Hubs's favorite song (Drops of Jupiter) for the end.  We knew they would do this from the last time we saw them (for his birthday a few years ago. Yes, I am awful at coming up with original ideas), but this time we wanted to beat the traffic, so we left before it played :(.  I did play the song for him a few times in the car ride back to the hotel :).

On the way back home the next day we picked up wine! Yay! We were a couple shipments behind on our wine club (we're cheap and don't want to pay for shipment) so we got four bottles! Surprisingly, we've only had one so far, lol.

I don't have a bunch of plans for this weekend.  I've actually turned down some invites, just so I'll be rested up to start the new job.  Today I have a doctor appointment (yep, that means another cycle review headed your way) and a facial scheduled (from a gift card the Hubs gave me years ago).  I know, it's a rough life.  All I need to do for the rest of the weekend is go shopping for some new professional duds, maybe get my car cleaned, and clean the house.  I have a feeling I'm going to be pretty busy starting, so I want to get a head start on the disaster the house is going to turn into, lol.