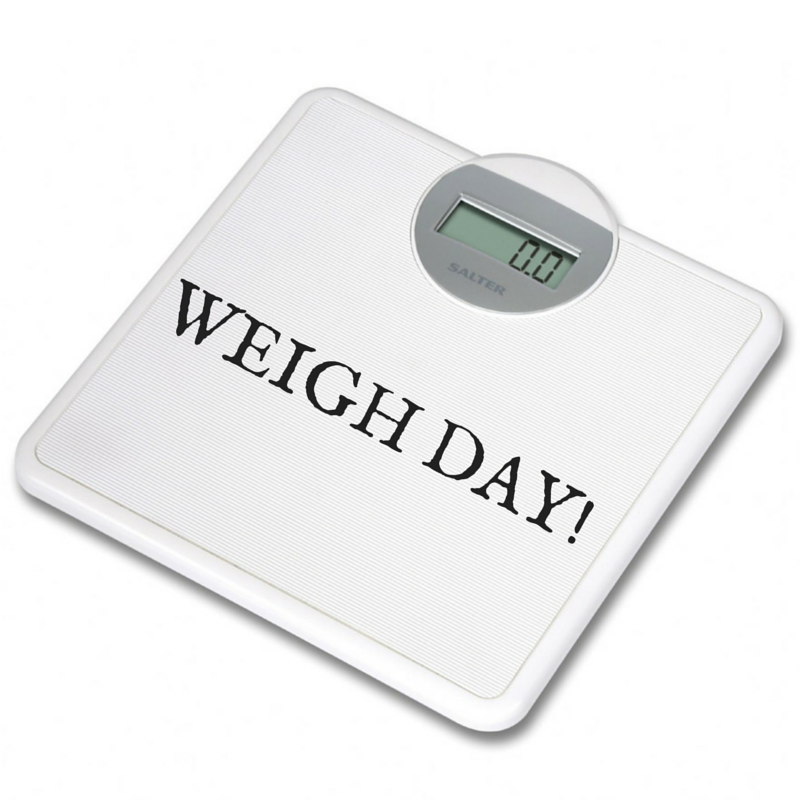 Welcome to our first official weigh day!  I'm not sure if last week counts or not, so I've decided we're starting at one today.  Props to the commenter who suggested weigh day :).  It was a close race, but it the end I liked something that wasn't tied a particular weekday in case I have to switch things up in the future.  So weigh day it is.  Also, that's my first attempt at making a graphic for this blog, so don't judge it too harshly.  Anyway, onto the actual post.

This last week went pretty well actually.  I knew I had a wedding to go to on Saturday, so I saved my extra points up for that occasion, which worked out just fine. I'm also starting to feel the effects of the weight loss. Yesterday I noticed my biggest pair of jeans are getting a little too loose, and my smaller pair of jeans are starting to fit well.  So yay for that!  Visibly I don't really notice anything yet, but I think it takes more time and more weight loss for it to become noticeable.

There was another shocking food realization for me this week.  On our way to the wedding (it was a 2 hour drive away) we got hungry.  Neither of us had eaten much other than breakfast and it was already mid afternoon, soooo we pulled over at the sight of the first burger king.  So bad, I know.  I ordered myself an original chicken sandwich then pulled up the points while we were waiting for our food. (Wrong order, I know I should look these things up ahead of time).  17 points for my little chicken sandwich, not even counting the cheese I put on there.  Again more than half of my day's allotted points.  Not cool, but at least now I know. Its hard to think that before I would normally have the sandwich (plus cheese), fries with ranch, and a soda for lunch.  No wonder I was gaining weight :(.

Yesterday we had fun with food though.  Normally we go out to eat after Sunday mass.  Yesterday I was craving all sorts of random foods I hadn't had in a while, so we decided to stop at the grocery store and pick out dinner there from whatever random things we wanted.  (Don't get any ideas about me having food cravings, I always have those. They've led us on some pretty fun adventures actually, like the day I woke up craving cuban food). I picked up some mango juice, apple sauce, a yogurt smoothie, and three kinds of cheddar.  I had also wanted pot roast with carrots and potatoes, but I think I'm just going to have to make that myself.  The Hubs ended up with a roast beef sandwich, some white american cheese he picked up from the deli, and some cheese and cheddar crackers.  Yea, we were in the mood for cheese a little bit. And yes, our meals were basically what you would feed to a five year old, but I never said I was mature.

Sorry about all the rambling.  On to the substance of the post.  I did weigh in today, down 1.2 lbs.  Less than I was expecting, though I might just go and blame it one the jeans I was wearing for being heavier than the pants I've worn to the weigh ins before.  I guess any progress is good, but I wish this progress would hurry itself up already!  I'm getting a little frustrated that last time I lost weight twice as fast as I am now (I pulled up the my old records), but I guess I am also three years older.  Who knew my already slow metabolism could slow down any more? Ugh. Oh well, here's hoping next week goes a little better.