7 Quick Takes on Halloween, All Saints Day, and All Souls Day

Happy Halloween! I have to be honest though, I’m not a huge Halloween person. Growing up, my parents weren’t huge fans, I think the last time I went trick or treating was around 4th grade. That, along with my having an aversion to scary things (even the most mild of things can give me nightmares, I’m a wimp), has led to me just not being super excited about Halloween. I’m not anti Halloween,  I’m just more likely to buy a bag of candy for myself and hang out at home than to get dressed up or decorate for it (which is probably exactly what I’ll be doing this year).

Back in college, I did tend to go all out and dress up for the school wide party.  I think my favorite costume was when me and two other friends dressed up as a blonde joke.  We had a blonde, a brunette, and a redhead, and went around telling blonde jokes.  It was pretty entertaining.  (In case you’re curious, I was the blonde out of the trio).

I think my creepiest Halloween was the year I had to fly on Halloween.  I don’t know why, there was just something about the airports and planes while taking a red-eye flight on a half empty plane that was a little spooky, haha.

While I might not get excited about dressing myself up, I am a big fan of dressing my pups up.  They might have a small wardrobe of their own. Last year I got my poor dog a koala and shark costume, though my favorite was the pig costume for my parent’s pug. 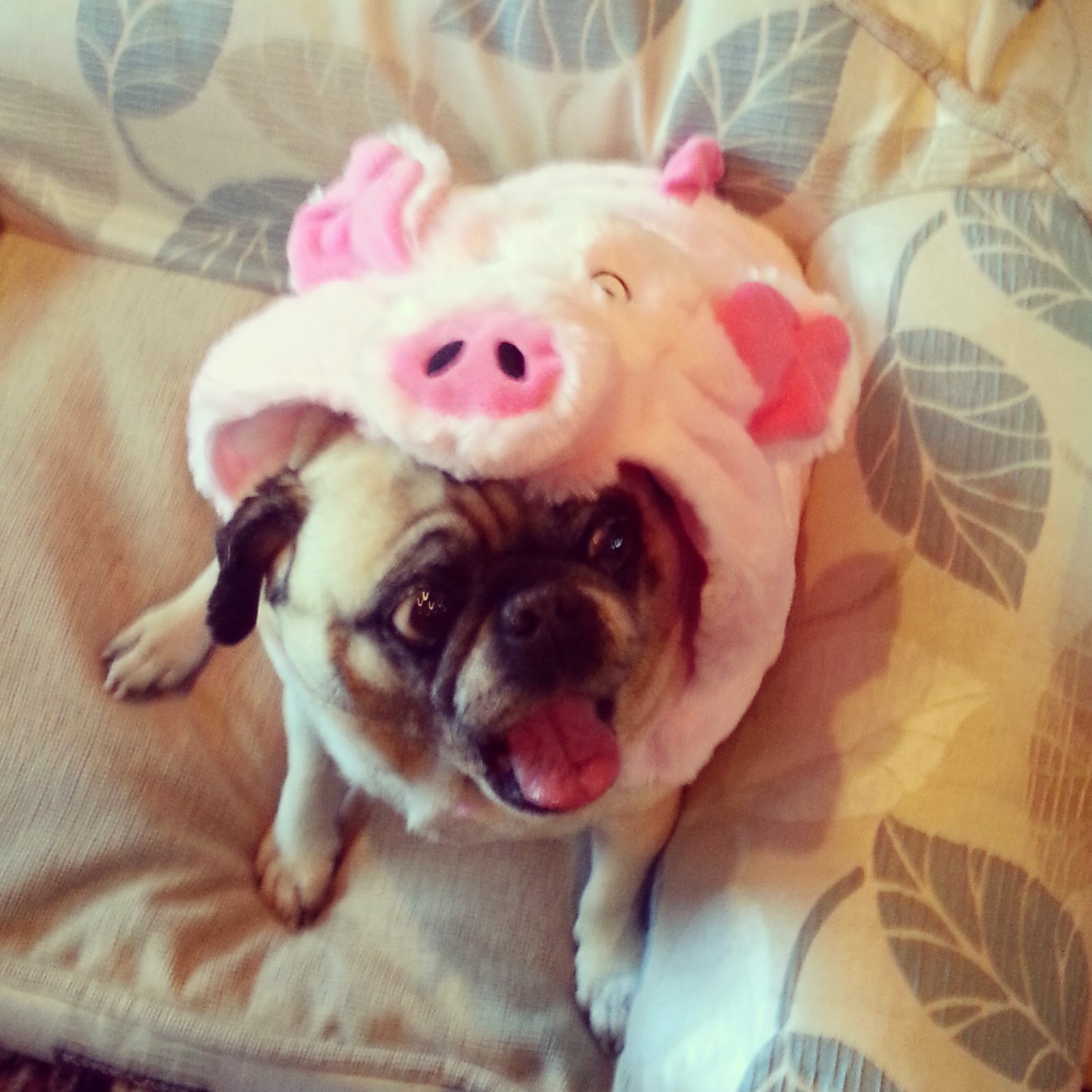 This year I seriously considered getting these for my dogs:

The Hubs is a huge action hero/marvel fan, and Thor is his favorite, so it would’ve been perfect.  I don't think the dogs would've loved them though, and since we didn’t really have anywhere to take them, I couldn’t really justify the cost for the sole purpose of putting pictures up on facebook.  They sure would’ve been cute though.

Although my parents weren’t into Halloween, they were into All Saints day. One year I was dressing up as some nun saint (though I can’t remember which one) and actually borrowed a habit from some Dominicans we’re friends with (I may have mentioned before I’m a pretty big fan of Dominicans).  I’ll have to see if I can find a picture of that somewhere.  That was probably the best costume I had for All Saints Day.

Speaking of All Saints Day, I saw this post by Simcha Fisher and it made me think about which saints I like more or less.  For the longest time, I had a really silly reason for disliking St. Thérèse of Lisieux.  You see, my favorite saint has always been St. Theresa of Avila.  I was born on her feast day, picked her as my confirmation saint, and even was lucky enough to visit Avila when I was younger.  I've always admired that she was intellectual, spiritual, and seemed to have a good sense of humor and balance as well.  I’m a big fan of her writing too.


Anyways, when I was really young I decided that you couldn’t like two saints with the same name, but that they were rivals and you had to pick one, lol.  So I was firmly pro-St. Theresa of Avila and against any other saints by the name of Theresa.  Even though rationally I know that’s silly, that underlying feeling has stuck with me for most of my life, and I’ve disliked Thérèse of Lisieux for no reason.  This year I’ve tried to learn more about her and get over my Theresa issue, and she really does seem like a lovely saint, but man, deep seated ideas like that are hard to get rid of.

This year I’ve also been doing more thinking about All Souls Day.  It’s a great opportunity to remember and pray for our friends and family members that have passed away.  My maternal grandfather’s brother, so I guess my great uncle, has been on my mind lately.  He passed away when I was very young, like 5 or 6, and I honestly don’t remember much about him, other than that he had some troubles.  So I don’t really know why he’s been on my mind, but maybe he needs some prayers. So if you could join me with praying for him especially on this All Souls Day, I’d appreciate it.  I’ll pray for you and your lost loved ones too.