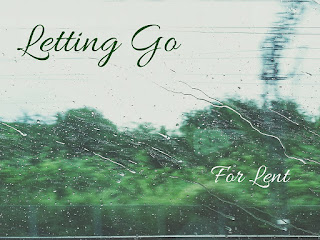 First of all, let me just say, I'm awful at lent.  If I figure out what to give up in advance, I inevitably fail.  If I don't, I never figure it out.  So this year, I went into lent with lofty plans. I was going to say the Rosary every day, go paleo give up gluten, stop being distracted at work, try to go to adoration weekly, and more.  I figured if I went in with a lot of plans, at least I would make it out of lent having done... some of them at least.  Yeah.... I only even kept one the first day, and that didn't even make it into the next day.  Have I ever mentioned that I have horrible will power? And that I'm bad at lent?

However, something else was going on as I entered into lent.  I just so happened to be at the end of one cycle, heading into another.  My cycle hadn't been a failure (on the ovulation front), but it hadn't been great either.  I felt like I was fighting a never ending battle to try to keep my hormones in a good range and with no results.

For the last couple years I always felt like I had to keep fighting.  I couldn't stop.  I had to make it to the end of the journey, one way or another.  I needed to know definitively whether I could or could not conceive, and if I could, I would keep fighting until it happened.  I was largely motivated by the fear of regret later in life. Knowing I missed my chance by giving up too early.  And I didn't want to take a break.  The thought of just putting things on pause just to pick then back up seemed overwhelming.  I had to keep the momentum going in order to keep going on. I was also motivated by the fact that I'm incredibly stubborn. The Hubs can verify that.

However, as time went on, it started to become clear that I wouldn't be getting my definitive answer.  Everything was working on paper, but nothing was happening in reality.  Month after month I would get my hopes up, only to have them dashed again and again.  We added more medicines every month.  More shots, more side effects, less energy for anything else, every month. It came to a point where there were no more answers we could find, we were just playing a guessing game. I also started to bury myself in my work.  The more I could bury myself in achievements at work, the less I could think about what I wasn't able to achieve in my personal life.  So... that was a healthy state of existence.  Yet every time I thought about taking a break or stopping for good, I felt to anxious too even really consider it.

So, back to lent.  Like I said, lent started at the tail end of once cycle.  A few days after it started I got some mediocre blood test results.  Oh and my doctor had gone on maternity leave (along with her nurse, and her receptionist went on grandma leave... couldn't they share the wealth?). So I had two options, and I had to make the decision myself: I could keep up with what we'd been doing... or I could stop. And for the first time, rather than feeling anxiety about the latter choice, peace started to sink in instead.  A peace I couldn't shake when I thought about it. So I told the Hubs I was thinking about stopping, maybe just for now, maybe for good,and he was on board. He'd been suggesting I take a break for a while, but I had kept resisting.

Actually following though wasn't too difficult, when the time came or me to take medications for the next cycle... I just didn't. I still had peace, but it wasn't particularly easy either. Believe me, I thought about running down to the pharmacy and renewing my prescriptions last second... but I didn't.  There has been a good amount of adjusting, physically and mentally.  My hormones have been very unhappy, and lashing out, mostly with nonstop breakouts.  There have been some tears too.  It's not an easy process to finally accept that I might never conceive, when I've been fighting against that idea for so long. It isn't all bad of course, there are just tough parts to this process.

All that it to say, I had my plans for lent, but I think that God had his own.  Maybe its a cop out, maybe its just me being lazy, but for whatever reason, this lent, instead of making up my own plans, I'm letting go of trying to conceive instead.