Infertility Is Just A... 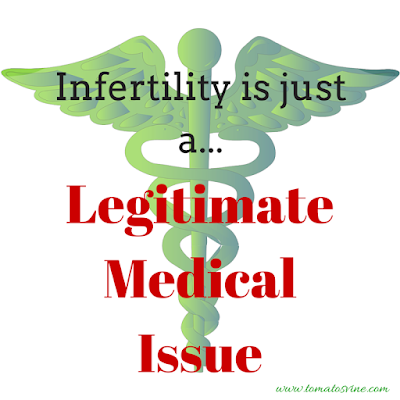 Legitimate Medical Issue. Ok, for some of you, that'a a no-brainer.  And I really hope it is for most of you. I talked about this a little bit during Infertility Awareness Week, but I thought I'd go into a little more detail.

Lately, for a number of reasons, we've been more open about our infertility journey. A lot of the time we've been met with love and support.  Other times, however, I've been met with some comments that make me work reallly hard on holding my tongue and being charitable.  Like when I was told that maybe what I need to do is stop all treatment and get a teddy bear.  Or to get a puppy. Or to "just" adopt, or "just" relax.

This most recently happened this morning, when my phlebotomist imparted some of the above "wisdom" on me. Now, ordinarily I would probably say something, but I have a policy about not making people who are stabbing me in the arm upset at me. So, instead of saying something, I just stewed and decided I would just get it out here instead.

The truth is, I am tired of being told, whether directly or indirectly, on purpose or not, that infertility is my fault.  Yes, there are things I can do to try to make it better, but in the end, I did not cause this or do something to deserve this.  Yet that's what people are saying to me when they say just relax, just stop thinking about it, just do this, that, or the other thing.  They are saying that, in their eyes, I'm doing something wrong, and if I "just" did one right thing, everything would be fine.  And much of the time, what I'm being told that I'm doing wrong is seeking medical treatment, for my legitimate medical condition!  Really!  When I hear "you're trying too hard", "stop focusing on it" or "just let go and let God", I hear that I am being told to not worry about or treat my medical issue! One that not only effects my fertility, but my overall health.

Stop and think for a minute.  Would any other medical condition ever be treated like that?  You have cancer? Oh, you should stop chemo, you're trying too hard, you should just take a nap.  Have diabetes? Oh, don't worry about insulin, just go have a drink and forget about your issues.  Have pneumonia?  Forget about antibiotics, just go take a vacation! Can you imagine anyone saying any of those things, and then giving themselves a pat on the back for being helpful? I can't.  Yet people do that ALL. THE. TIME with infertility.

I'm really tired of my medical issues being down played.  On top of that, I'm tired of people telling me to laugh off those comments as "well-meaning." I'm tired of telling myself that these are just society's misconceptions that I have to accept.

I have plenty enough to deal with on a daily basis, like regular life events that make me want to cry or keeping a happy face on when I'm dealing with pills, shots, side effects, symptoms, and soreness.  I don't want to be expending more energy that I don't have on making other people feel better.

So, what should happen instead?  Well, I covered some of it here before, so I won't reiterate those. However, beyond those basics, my biggest wish is that people stop treating infertility like just a minor inconvenience, or making people feel like they're at fault. I don't mean that I want to be met with pity or sadness.  But it would be nice to, you know, be asked how I'm doing, have the difficulty acknowledged, or have a shoulder to lean on.

And of course, It would be great to have people think before they speak, to have people consider what the words they are using are saying.  Are they actually comforting and helpful?  Even better would be people informing those around them, correcting the misconceptions and common platitudes before they reach another person, in a kind manner of course.  If we can start there, maybe we can start chipping away at the shame and fault that those experiencing infertility shouldn't, but do, feel.

What do you think? What would you like to see people do?