And Our Patron Saints for the Year Are....

TCIE announced her patron saint of the year today. In case you'd like to find yours as well, and hadn't run across the website already, head on over here.  So anyways, after seeing TCIE's post, first I thought I would wait until the new year to find my own, considering its a bit of an awkward spot between the new liturgical and calendar years. But then I got curious...so I decided I would just check it out for fun, but not pick my saint yet.  Then I got my saint ... and I'm definitely keeping him.  Okay, long enough lead into it, my patron saint for 2015 is: 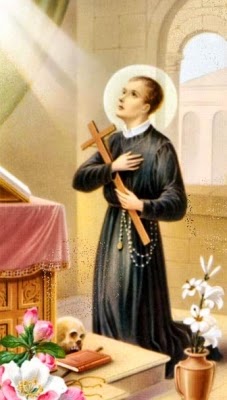 
I'll admit, I was shocked when he showed up. See, this saint and I have a little bit of recent history.  First of all, he's the patron saint of the Catholic  infertility group I belong to on facebook, so right off the bat I knew there was a connection, and it also means I'll be trying to pray for those in that group more as well :).  Actually, I think its from the group that I first heard of St. Gerard.  It was around that same time that I also started looking into novenas, and I wanted to find a patron saint of infertility that I connected with.  Unfortunately, St. Gerard and I got off on the wrong foot, and he, not being someone who dealt with infertility himself, got dismissed pretty quickly.  Oops.

Recently though, I had been thinking about him more, and maybe asking for some intercession from him from time to time.  What lead to that was a personal connection with his name.  You see, there was a Dominican priest who was friends with my family when I was growing up, who's name was Father Gerard.  He passed away while I was still young, but I just remember him as always being so kind and joyful, and so that association led me back to St. Gerard.

Another surprising thing is St. Gerard's feast day.  Its the day after my birthday!  Its also on the birthday of a friend of mine who is pregnant right now, so I think she deserves some extra prayers too.

I can't lie though, thing that stands out most to me about St. Gerard is his patronage.  Its not just infertility, as I had assumed before, but of Pregnancy, Children, Childbirth, and Mothers.  Seeing that, on the eve of my surgery no less, gives me some hope.  I mean, I don't want to read too much into it, and I don't want to be superstitious about it or anything like that.  But I've been in a more hopeless place lately, more leaning to thinking that surgery will just be a last failed step in our infertility treatment that will allow us to get closure and then move on.  So seeing what my new friend is a patron saint of gives me a little much needed balance I think, and some extra hope knowing I'll have someone else in my corner in all of this. All in all, I'm just excited to spend the year learning about and getting to know my new patron saint!

I have to mention though, after I got such an awesome saint, I told the Hubs that he had to do it to!  So he clicked on over, and was assigned: 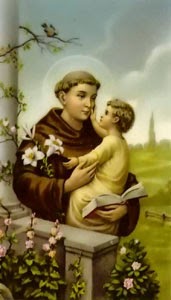 I love it, he seems like an awesome saint for the Hubs for this year.  I definitely see some crossover between our two saints, which the Hubs picked up immediately.  Another funny coincidence, St Anthony's feast day is also close to Hub's birthday, within a week of it! I'm sure St. Anthony will come in handy when the Hubs is tracking down things that I've lost (happens all the time). I also love the emphasis on the sacraments between the two of ours: mine covers confession and  the Hub's covers the Blessed Sacrament.  I think we could use some frequenting of both of those more.

Thanks for stopping by and learning about our new saints!  I hope this has convinced you to go find your own patron saint too :).