This year, lent has kind of snuck up on me.  I started seeing Facebook posts from friends that it was coming up, and I was kind of in shock at how early it is this year.  I have to confess, I didn't even get my Christmas Tree and decorations down till this week (during which process we also knocked a light off the ceiling).  The process started a few weeks ago, but I'm a little slow, haha.

But anyways, now its almost here, and I've started thinking about what I should do this year to make it a good one. I think I want to focus on doing something with each of the three important areas prayer, fasting, and almsgiving.  Here are some of the ideas I've come up with so far.

Prayer:  Last year, the main this the Hubs and I did during lent was read from the Bible (almost) every night, starting at the very beginning.  The idea was to get us started with a good habit that we would carry throughout the year.  Yea...shortly after lent we hit Leviticus and just could not keep up with it.  Maybe this year we'll pick it up again, but maybe skip the listings of laws, just to keep the momentum going.

I also want to work on, using a handy acronym provided by a priest I knew in college, MARC: Mass, adoration, rosary, and confession.  I've been working on saying the rosary on the way to work, and I want to commit to saying it every day, or at least every work day.  I also need to work more on the other three.  I think I got to adoration once and confession and daily mass only a few times last year. Ideally, I'd like to start going to daily mass and adoration weekly and confession every other week maybe.  I'm not sure if I want to commit to that exactly, or just commit to trying to increase the frequency, I'm still thinking about it.

Fasting:  Another thing from last year that I think I'd like to do again is give up going out for food.  We aren't really good cooks over here, and with being tired and lazy, we tend to do a lot of going out or picking up fast food for lunch and dinner.  Last year we gave it all up, well except for our tradition of going out to eat after mass on Sunday.  Although it required a lot of work (from me) and patience (from the Hubs), I think it was a good experience over all.

I think I'd also like to  "fast" from wasting my time.  I spend a lot of my down time on Netflix binges and aimlessly surfing the internet.  I don't know if I could do a straight up ban on it, or even craft a rule for myself, but I do want to be more mindful of how I'm spending my time, and perhaps take some more time on spiritual reading, or taking care of our place instead.

Almsgiving:  This is a tough one.  I've kind of tended to ignore almsgiving in the past.  Either I was a starving student, just married and getting our feet on the ground, or, last year, we had just bought a place.  This year things aren't much different, after a slew of unexpected expenditures last year, finances are still pretty tight, though I would like to see where we can find some wiggle room.

But even if I can't give much money, I know there's something else I can give, my time. Last week there was a ministry fair at our parish, and there are a couple we are looking into.  One I think we're most leaning towards doing is driving elderly parishioners who can't drive themselves to church.  I also approached a member of the parish counsel about possibly starting a new ministry.  There isn't much to say about it yet, its obviously still in the super early stages, and I still have to hear back from the parish counsel on whether its something they want.  But I am doing research, and if I do get the green light I'll let you know all about it :).

Beyond all this, I feel like there's a couple things God's been trying to teach me that I want to focus on, acceptance and detachment.  More particularly, accepting what He brings into my life, and detachment from those things that don't matter.  There's not really anything I can think of to do to learn about these, but it is something I want to think about, and try to understand what He is trying to do.

Well, at least this is a start, and gets me thinking.  What are you doing for lent?

By the way, I'm linking up with Blessed is She.  Head over there for more great posts. 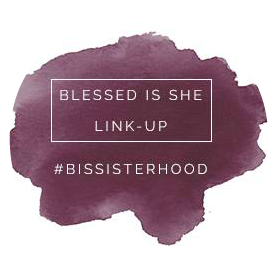