I think I'll start at the beginning of the year. For the New Years holiday, the Hubs and I went on a roadtrip to northern California. It's become a little tradition of ours, so there years in a row now we've roadtripped to northern California, and visited the Carmel mission on the way, which is where St. Junipero Serra is buried. It's such a beautiful place, we love it there! 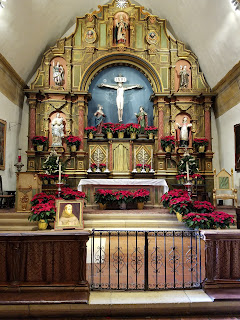 Now for the last... good while, maybe months or year, I've been in such a spiritually dry place. But as we were touring the mission, and then in Mass on New Years Eve (at another church), I felt God's presence and so much love. And I started to have hope that this would be a good year, and that this might just be the year our family would grow!

Fast forward to February 1st. As I left home to head to work, I spotted two roses on my favorite rose bush. Now this is California, so it's not like it was blooming in the snow, but it still made me smile and think that God was at work in something. As I drove into work as I get a call from our facilitator. She informed me that we've been picked by a birth mother due March 10th, and tears streamed down my face as she told me all the details that sound too good to be true. She would email me more information as we decided whether we want to move forward (of course!). I call the Hubs, who answers "what's wrong?", we never call each other that early unless there's a problem haha. Oh the excitement in his voice as I told him! And of course he wanted to move forward too! So we look over the paper work, and call the facilitator to officially say yes. There were so many little coincidences we noticed even in the paperwork that seemed to show God was in the details of this, but we tried to stay as guarded as we could, just in case.

That night we told my parents, and my mom had started planning a baby shower by the next morning! We then told our friends and coworkers, while of course being cautious that things could change and nothing was certain, but everyone was excited and supportive.  In the end, there were three baby showers thrown for us! 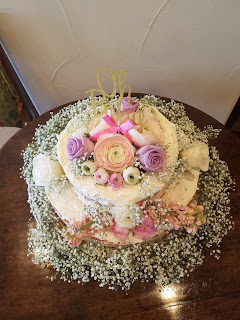 We started cleaning out the spare room that was always supposed to be the nursery, although I had doubted its day would ever come. My friends who had recently had babies took me around the baby stores and helped me gather or borrow all the necessities in case we got the call early. Baby stuff started to pile up and take over our house! We were reluctant at first to unpack boxes and wash clothes, but in the end we decided we'd rather plan for the best instead of the worst, and be ready for the baby we could bring home! We started reading books on taking care of babies, and took a class too!

Life was a blur of phone calls and preparations and so much excitement and worry. The birth mother wanted a pretty closed adoption, so we weren't in contact with her, which was a little nerve wracking, and a little sad that we couldn't get to know her, but of course we wanted to respect her wishes. The people that were in contact with her said she was strong in her plan, and she sounded like such an amazing woman who really just wanted to provide the best life for her child. I'm still in awe of the trust placed in us. Still, we were on edge, not knowing what would happen, and having no control. I'm a little bit of a control freak, so this was a learning experience for sure! All along the way though, God sent us so much comfort, reassurance, and peace. So many little things reminded us that God would take care of us, no matter what happened. The Hubs was pretty calm too, he has always been my rock in everything, and this was no different!

I checked in weekly with the social worker who was coordinating with the birth mother. She was so sweet, and was very positive about everything. She sent along updates, and even ultrasounds that the birth mother wanted us to have. Oh it was so surreal to see the little baby that could be joining our family! We hugged and stared in silence at the little girl that could be our daughter!

An induction date was scheduled, and we started to decided how we would travel and stay there. Although we initially wanted to drive, the weather in between didn't look so conducive, so we decided to fly. We finally booked tickets, a hotel room, and a car rental the week before. Then, sooner than we knew it, it was time to go! We packed our bags, including one for the baby, and headed to Wisconsin!