Sorry about not getting this review up sooner, I've been lazy and to be honest, not particularly excited about this recipe, but here goes:

The last recipe in the box was Summer Saute with Fergola Sarda & Buffalo Mozzarella. 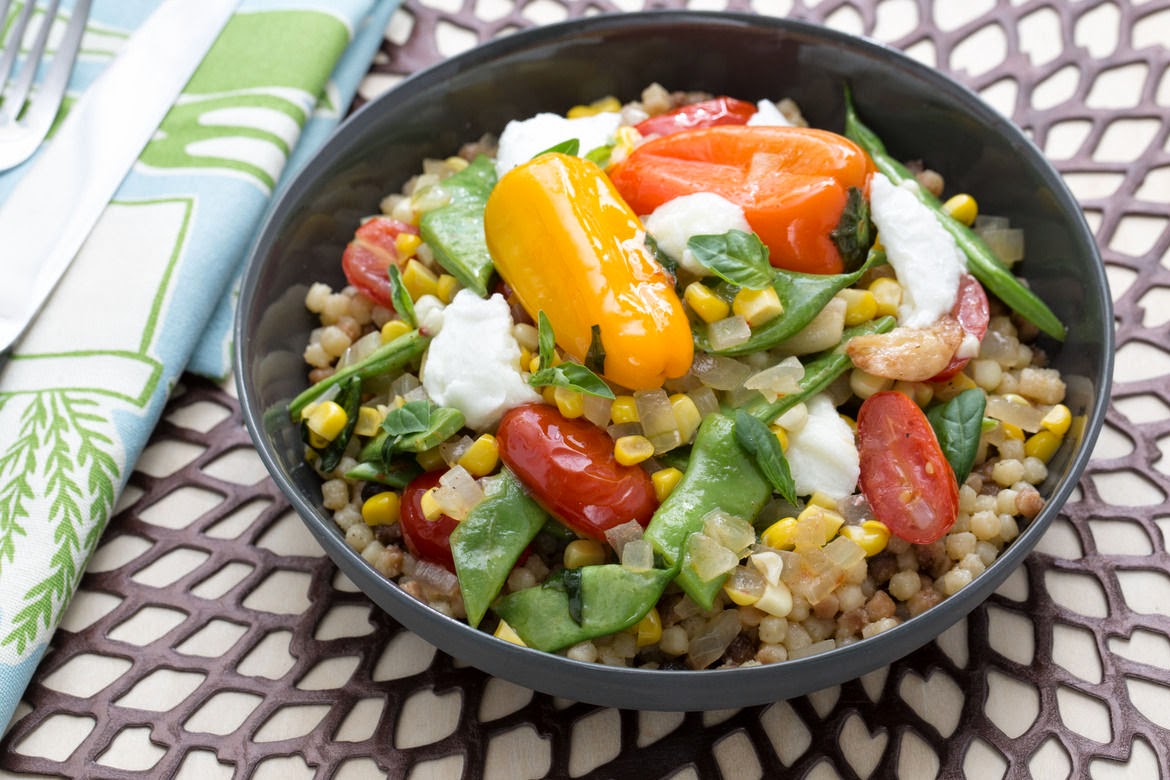 Its all vegetables, and I'm still working on learning to like veggies, so I was worried, but I still had to give it a shot.

This time, I finally got my act together and got a decent picture of everything before the cooking got started:
I got started with cooking the fergola (which I never heard of before) and immediately ran into a problem.  While all of the other recipes were incredibly specific, this one did not say how much water to boil or at what temperature to cook the fergola after boiling.  I guesstimated and it turned out okay, as far as I know I guess. 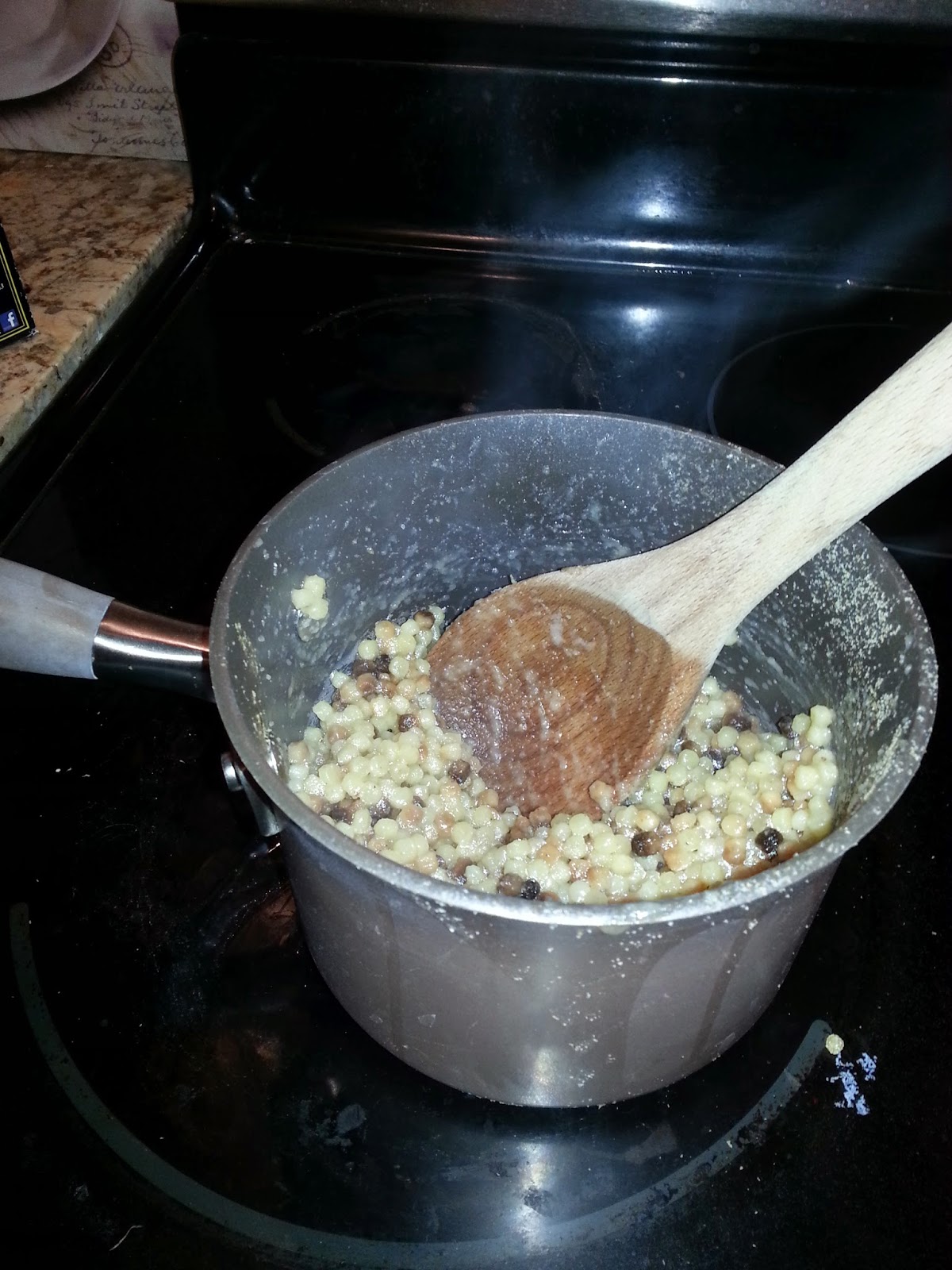 While that was cooking I worked on cutting up all the veggies.  This recipe was definitely more work intensive that the others, so prep took longer than I had thought. Okay, and can we talk about getting corn off the cob?  I really should've googled that beforehand, I got corn everywhere! I guess you've gotta learn some lessons the hard way? 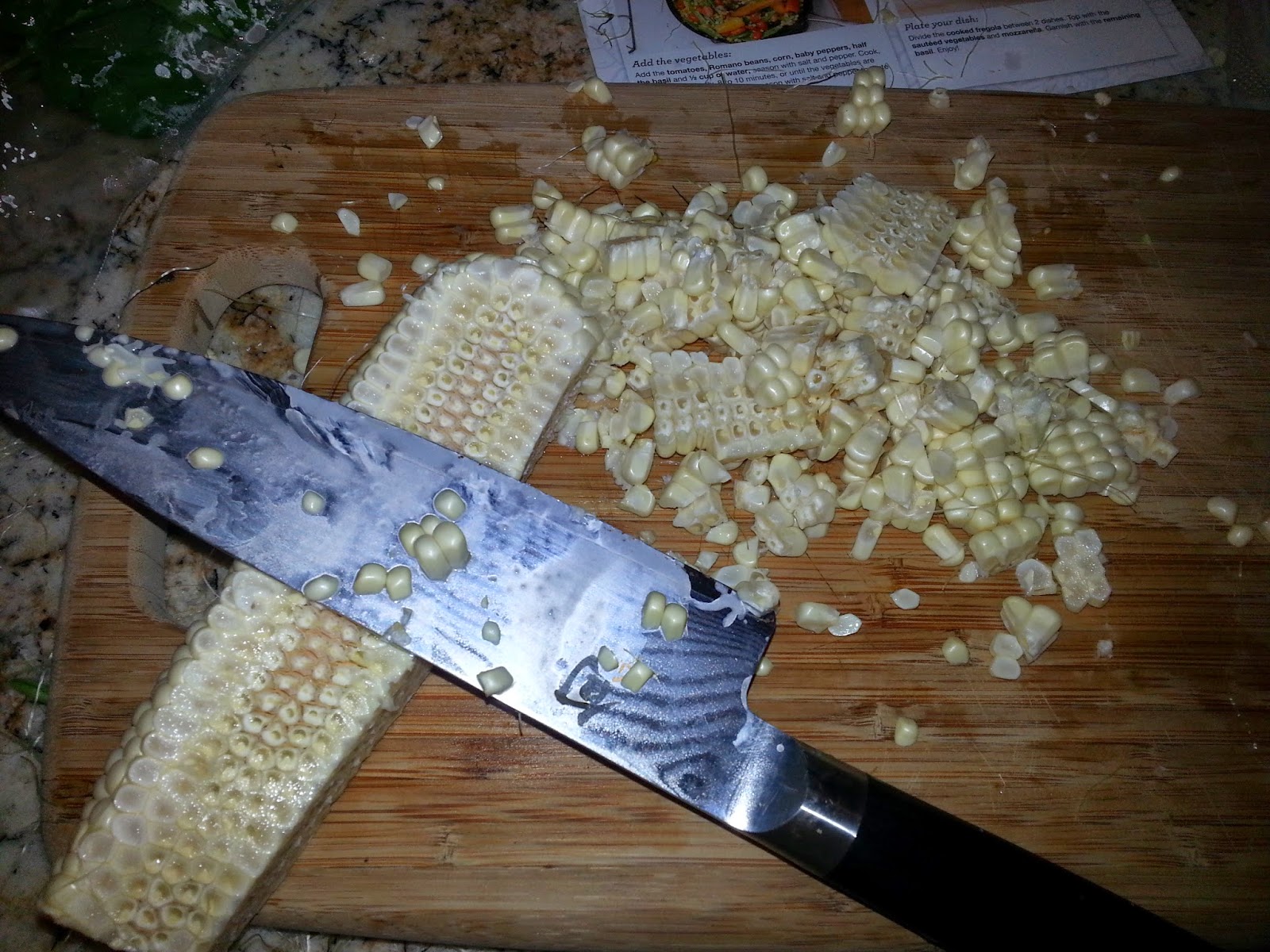 But i finally got that done and got everything cooking! 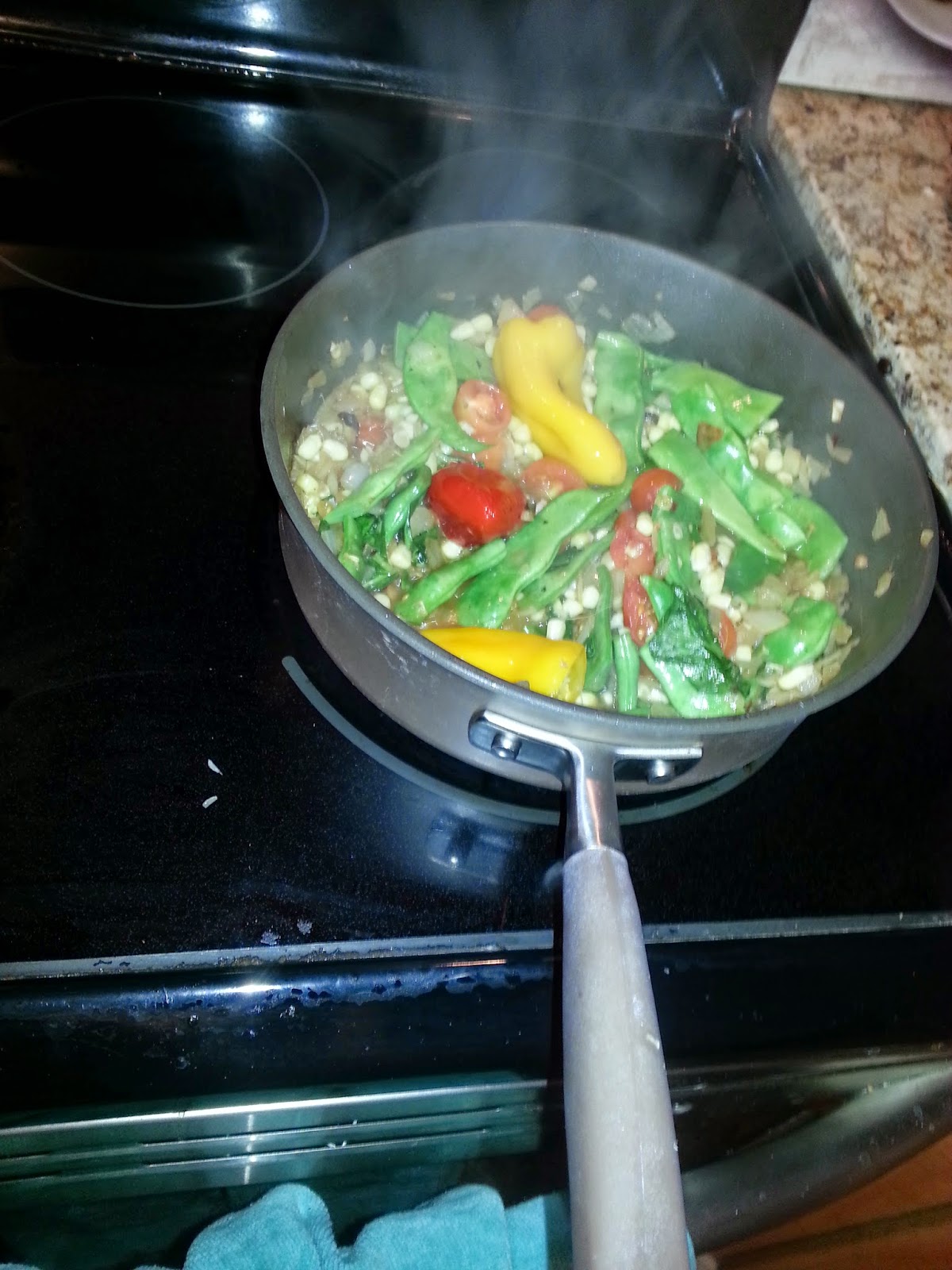 That part was easy, and it did look yummy!  Pretty soon it was done and I got it on the plate, all pretty looking! 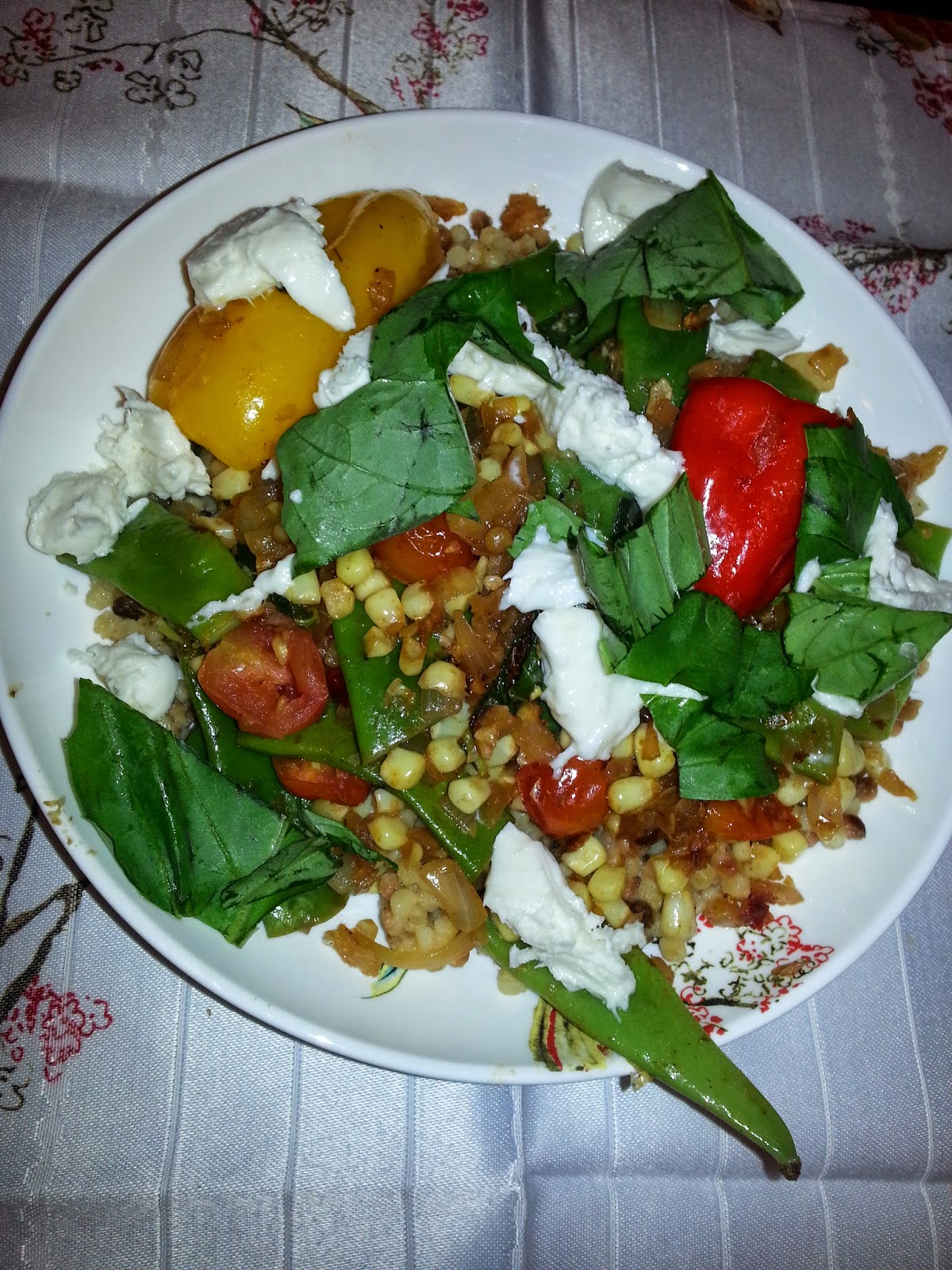 I have to say, out of all the recipes, I think this one looked most like its picture.  So for the verdict?  Well... it was a lot of veggies.  I know, I'm awful, but you can't change your tastes over night?  It was okay... but both me and the hubs felt like it was a little bland.  It needed some... zing.  So we did something I hate to do and added to the recipe, but a little balsamic perked it right up.  It seemed natural considering the recipe had mozzarella, tomatoes, and basil.  And that was it for this blue apron box!

So all in all, I have to admit I'm a fan of Blue Apron.  I really like that we got out of our comfort zones and tried recipes that I would never pick on my own.  A lot of times I'll let the fact that I don't know how to do something keep me from trying something new, but this forced me to try and taught me some new skills along the way.  On the down side, its on the pricey side at $10 a meal per person.  So the final decision is ... drumroll please... not very exciting, haha.  Blue Apron allows you to keep the subscription but cancel a week in advance if you don't like the recipes. For now, we think we'll keep it to one to two boxes a month, depending on whether the recipes sound good.  Stay tuned for the next box!

By the way, as a disclaimer and if anyone is curious, I was in no way paid for reviewing, I just felt like it might be fun.